The increasing digitization of healthcare records has made it more important to have a set of technologies and infrastructure that enable healthcare organizations to effectively create, store, transform, exchange, and consume these records. This post demonstrates how it is possible to build a reference implementation for processing healthcare records that addresses several common use cases, using only open source technologies.

This post introduces the Alvearie Clinical Ingestion Pattern, a reference implementation to ingest, process and store clinical records using existing healthcare record standards. The framework fulfills several design considerations that will be outlined in the next section and that can be extended to implement typical healthcare record use cases. It is built using open source technologies and a Helm Chart is provided in order to facilitate its deployment on a Kubernetes cluster, running potentially on any public or private cloud.

As healthcare records have become more digitized, there have been several steps made in the right direction to facilitate working with those records and some fundamental problems have already been solved. For example, the previously disparate set of data representation formats used by the various healthcare organizations made it harder to interoperate, however more organizations agree on a standard way to represent and exchange these healthcare records as a result of Health Level Seven International (HL7) creating the Fast Healthcare Interoperability Resources (FHIR) specification. While agreeing on a standard for exchanging data is crucial to creating a healthcare records processing pipeline, it is only step one. In this section we try to discuss and solve some of additional aspects needed in order to process healthcare records effectively.

There are several non-functional characteristics that need to be considered in order to build a true healthcare records processing pattern that will be able to meet the challenges of the modern healthcare organization. Those characteristics include:

From a functional perspective, a healthcare records processing pattern needs to allow its users to input healthcare records of multiple kinds using some of the more commonly used formats, e.g. FHIR v4 and HL7 v3. The mechanism to accept records should allow for high throughput and the records should be persisted for traceability purposes. Multiple input modalities may be useful, for instance input via a messaging framework and over HTTP. The records should flow through an ingestion pipeline that would normalize the data, validate it, potentially transform it and ultimately store it. Appropriate logging, resiliency, error reporting and metrics should be maintained throughout the process.

In general, processing healthcare records falls within the realm of what is known as data integration, which is the process of combining data from different sources and providing users a unified view of said data. Data integration use cases may involve non-engineering teams, therefore it is a design consideration of the pattern covered in this post to provide non-engineering teams with a simple way to extend and modify the data flows.

The foundation of the pattern is Apache NiFi. Apache NiFi provides a graphical user interface in the form of a canvas for data integrators to build data processing workflows using what are known as “processors”. NiFi comes out of the box with multiple processors that allow for data input and output to and from various sources, and for transforming the data into multiple data formats. Processors are linked together in such a way that the output of one becomes the input to the other, and it is in this manner that processor groups of increasing complexity can be built.

Once a sufficiently complex and functional group of processors that achieves a specific purpose is built, it can typically be managed independently. Think of it as how a class, a method or a function can be abstracted out in code and managed independently as a utility. These modular process groups in NiFi are stored and managed in a NiFi Registry. The NiFi Registry allows for version control and sharing of NiFi process groups, and it is backed by a Github repository where a team can be continuously delivering process group updates or new process groups to be consumed by a NiFi server user. The NiFi Registry is the second element of this pattern, and it is used to deliver the various NiFi processors used by the ingestion pattern. You can think of the NiFi canvas and NiFi Registry respectively as a big user-friendly empty LEGO© board and a bag of working LEGO© pieces that you will use to build structures on your board.

Apache Kafka is an open source events stream framework that addresses these characteristics. The ingestion pattern connects to a Kafka topic, which is just a message queue, listening for clinical data posted there, so that when data appears, it gets picked up by the framework and ingested. While posting to a Kafka topic is the main data input method, the Ingestion Pattern also accepts data via a conventional REST API.

Clinical data that is posted to the Ingestion Pattern typically needs to be processed in various ways. Processing may include:

The Ingestion Pattern includes pre-defined spots where one or more of these processing steps can be plugged in. It also includes a configuration mechanism to specify, on a per record basis, exactly which operations from the available processing steps to run. The pattern includes default implementations for some of these processors, but those can be replaced or complemented with others that can be plugged in to satisfy different user needs.

After the clinical data has been processed, it may need to be persisted. The standard for persisting clinical data is using a FHIR server. The Ingestion Pattern includes the IBM FHIR Server setup out of the box, which serves as the default target for ingested data. That FHIR server is exposed outside the pattern where clinical data consumers can access it using the FHIR Server REST APIs.

The Ingestion Pattern includes some default activity monitoring for records that have been put through via Prometheus monitors over its existing components, as well as processor and memory usage of some of its components. It also includes monitors over the actual Kubernetes cluster where the pattern is running. All monitoring information can be visualized using the included Grafana instance.

The instructions here assume that you have a working Kubernetes Cluster 1.10+ with Helm 3.0+.

The multiple components of the Ingestion Pattern can be deployed in a single step on a Kubernetes Cluster using the Alvearie Ingestion Helm chart. The chart performs all the steps necessary to deploy the Ingestion Pattern, ensure that there is connectivity between its various elements, set up the NiFi canvas with the corresponding processors, and initialize the necessary components. This greatly simplifies the startup process.

The following simple steps are necessary in order to run the Alvearie Clinical Ingestion Pattern:

After running the commands above, you will see that all the corresponding elements of the Ingestion Pattern will start to be laid out, and eventually all the Kubernetes resources will be up and running: 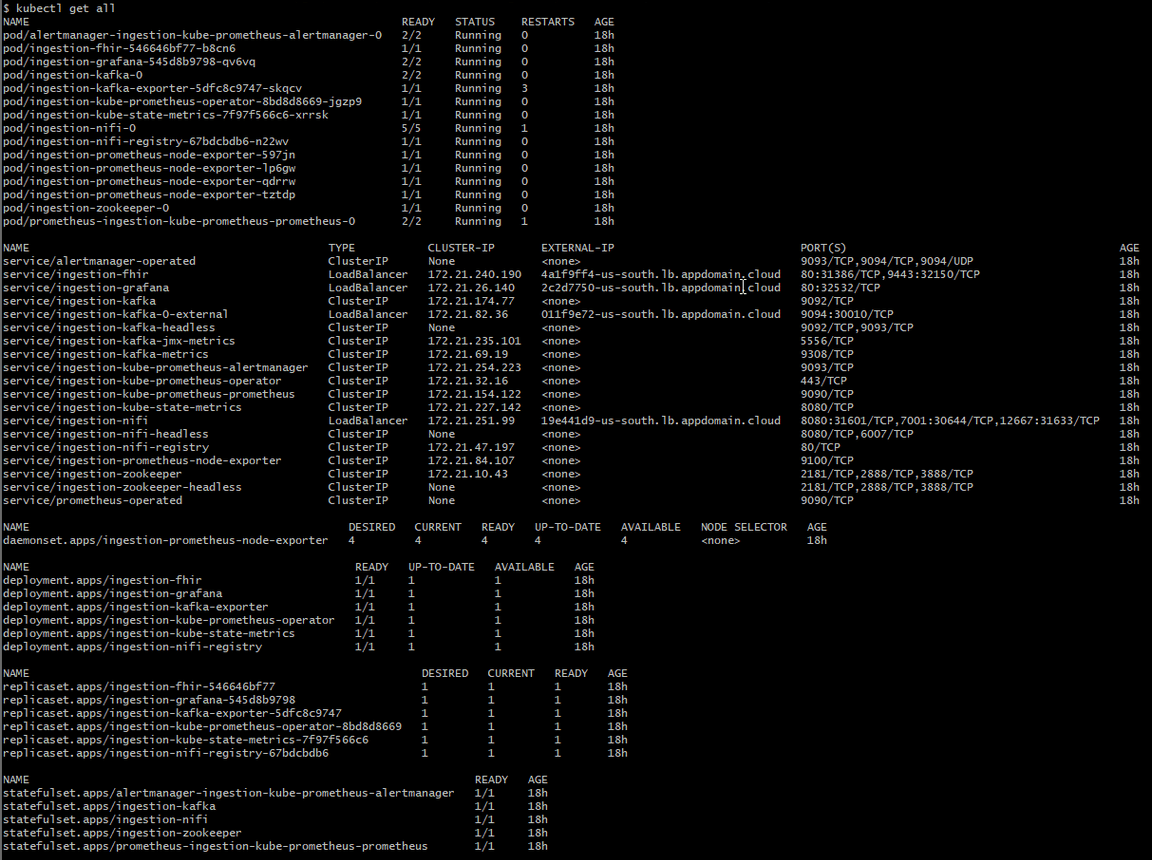 Architecturally, that helm install has deployed the following: 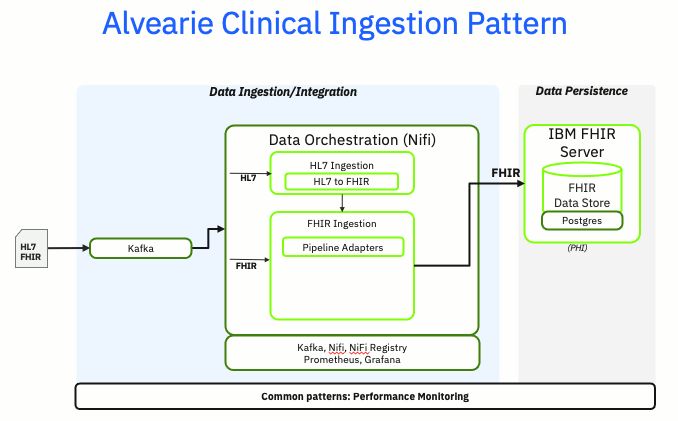 By default, there are four external services exposed by the Alvearie Clinical Ingestion Pattern: NiFi, Kafka, FHIR, and Grafana. Let’s go through them one by one along with their corresponding functionality.

To obtain the external IP for each of the exposed services run the following command:

Note the result of this command also includes the corresponding ports where the services are available, but the default ports are also specified here for simplicity. 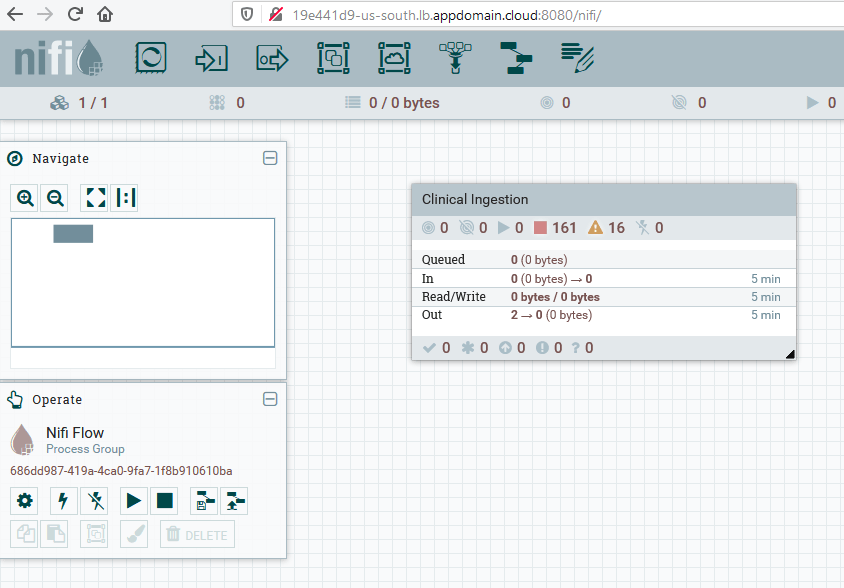 The NiFi canvas will show a pre-configured main process group called “Clinical Ingestion,” which is the entry point to the Ingestion Pattern’s NiFi components. From here you can add, remove or modify ingestion processing elements, add new inputs or outputs, change the URLs to some of the other services, etc.

The Ingestion Pattern exposes a Kafka broker that can be used to feed clinical data into the pattern, but before pushing the data in, let’s create some synthetic clinical data to push. Synthetic patient data can be generated using the Synthea Patient Generator. Download Synthea and run the following command (for more information on Synthea visit their Github page):

The previous command will have created FHIR bundles for 10 patients with their clinical history and their corresponding medical providers.

Now that we have some test clinical data, let’s ingest it. It’s not necessary for you to install Kafka; if you have Docker installed you can run a container that has a Kafka producer as follows. From the list of services grab the external IP for the service called ingestion-kafka-0-external. This will be the address of your Kafka broker. With that, run the following commands:

After running the previous command (the first time you run it, it may take a minute to download the corresponding Docker image), you will get the prompt for the Alvearie Clinical Ingestion Pattern Kafka topic:

The prompt accepts a patient per line, so on a different terminal, remove all new lines from one of your synthetic patients using the command below and paste the patient on the Kafka prompt:

If you don’t have Docker installed, you can also post the patient using the pattern’s REST API by running the following command:

After posting the patient either through Kafka or via HTTP, the patient will eventually be persisted in the FHIR server. From the list of services, grab the external IP for the service called ingestion-fhir. This will be the address of your FHIR server.

You can then query the list of FHIR resources using your browser or an HTTP client. For instance, for querying patients you would do: http://{fhir-external-ip}:80/fhir-server/api/v4/Patient?_format=json (default credentials: fhiruser/integrati0n) 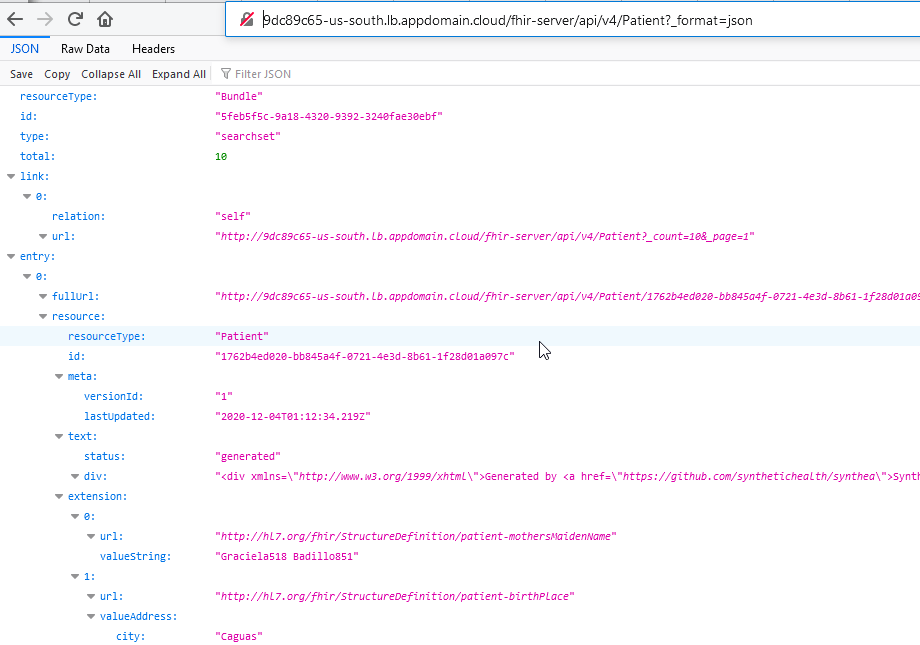 Finally, from the list of services grab the external IP for the service called ingestion-grafana. This will be the address of your Grafana server. With it, navigate to http://{grafana-external-ip} (default credentials admin/admin). 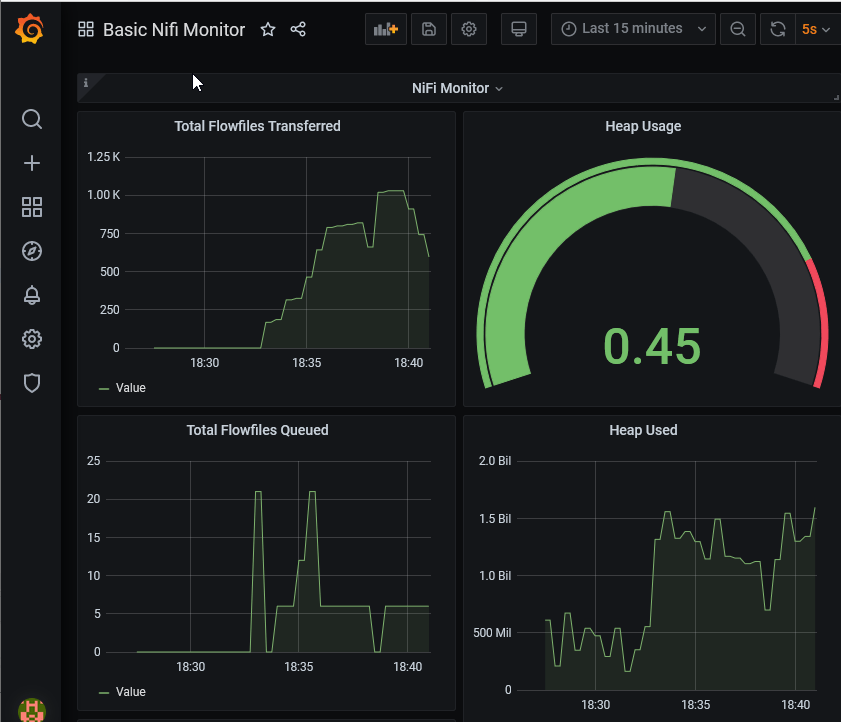 The Alvearie Clinical Ingestion Pattern is not currently meant to be ready for production use out of the box, it is more of an implementation of a Reference Design, that can evolve into a reference implementation for production use. Still, an effective pattern for efficient clinical data ingestion enables advanced analytics and opens the door to a number of important healthcare use cases, including:

The Alvearie Clinical Ingestion Pattern is fully open source and it’s built using open source technology, including the corresponding Helm charts needed to put it together and deploy it. Each of the subcomponents that comprise the pattern can be modified using the corresponding Helm deployment properties in order to meet the persistence, availability, scalability and security requirements of a production grade deployment.